A Plus clashes with Accra Digital Center MD over friendship with Kennedy Agyapong, Bryan Acheampong

OFFICES FOR MPs: SPARE THE PUBLIC PURSE AND SCRAP THEIR EX-GRATIA/ALLAWA TO FUND THE PROJECT-OLUMANBA TO GOV’T.

Kofi Ofosu Nkansah, Managing Director of the Accra Digital Centre might have stepped on the wrong foot after musician and political activist Kwame Asare Obeng popularly known as A-Plus took him to the cleaners over a post he made on social media.

Ofosu Nkansah, in a post that appears to be a shade, said that any member of the governing party who shares a relationship with the target of the post is working against the interest of the party.

“There is a loudmouth who is always attacking the Prez and calling him names. You are a party government bigwig close to the Prez and you entertain this loudmouth.

He proudly mentions you as his friends/confidantes. The logical conclusion is that you support the attacks on the Prez. No ifs or buts,” the post reads.

A Plus who admitted to being the target of the post, fired back albeit with more missiles than Ofosu Nkansah might have anticipated.

A Plus first questioned whether Ofosu Nkansah is ready to take on Kennedy Agyapong or Bryan Acheampong who, in his wisdom, are the NPP bigwigs he has relations with.

He further quizzed if the Accra Digital Centre, MD, is aware that he is still in contact with President Akufo-Addo.

“Are you referring to Kennedy Agyapong or Bryan Achampong? But you, can you fight those two? Or you are referring to John Boadu? Or Sammy Awuku? Ah! But I spoke to the same Nana Akufo Addo you are referring to few days to the election? You want to act like you are some boss in the NPP. Kwasia, when was the last time you spoke with the president? Nana takes me more serious than you. You are not even bold. Look at how you are beating about the bush.”

The attack then degenerated with more expletives and revelations being made about a hatchet job some NPP persons with Ofosu Nkansah as the conveyor.

“The other day I warned, you called me countless times and sent me messages asking if you have wronged me. “Oh bro, am I the same Kofi Ofosu or you are referring to a different person.” Then you called Aloe at GRA to cry to him to come and beg me. You have forgotten errrh??? You have been smoking some cheap weed abi?

“Today you are back on your page fooling again abi? Because you heard the speculation that someone will get a position instead of your person bi so you have been sent to start fooling abi? You have forgotten that same time 4 years ago I was sent to do same to Bryan Achampong? Later, I realised was misled and apologised. That’s how we became friends. So you can’t see that you are being used? The guy promised to appoint you when given the nod right? We see you long time. Don’t you know that when you forward a WhatsApp message to a friend, that friend also forwards it to his best friend?

“I have you in check big time!!! NPP errrh, not only bigwigs like me ooo. Every sensible person in the party loves me. You can never say something I won’t hear. Never!!! So, after dealing with you, I’ll expose who sent you and deal with them. See, I’ll take all of you to unfamiliar territories and beat you to your game, simple!!

“I’ll play the conversation with Aloe on Facebook and post messages from all those you called to come and beg me. Last night, I called Aloe and told him to warn you. I’m very sure he has!!! It’s because of stupid people like you that I keep records. Stop fooling!!! I’ve warned you just like I warned Nana Hesse!!! You’ll cause problems for people. You don’t know that I have you and Angela’s folder errrh? Wafon saa no obaa bia wo be di. Sia!!!, “ he wrote on Facebook. 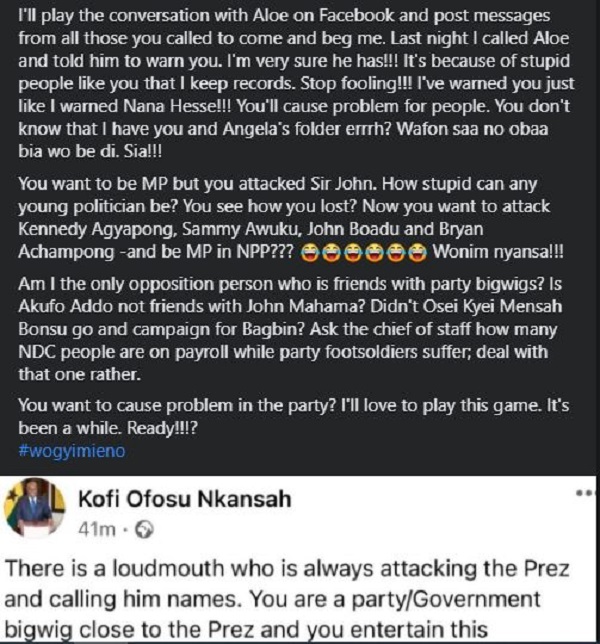 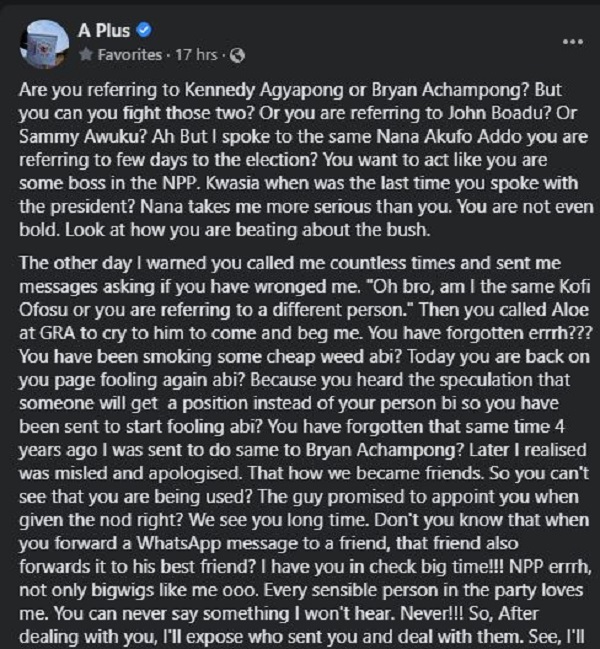 Bryan Acheampong will be President of Ghana in 2028 – Nigel Gaisie

Source:www.ghanaweb.com The General Overseer of Prophetic Hill Chapel, Nigel Gaisie has stated that he has …