Daniel Alubadek, a geography tutor of the Wenchi Methodist Senior High School, who took some of his students on an excursion to the Kintampo waterfalls, and suffered a disaster, is still bedridden, four years after the unfortunate event.

According to medical reports sighted by GhanaWeb, Alubadek needs $91,571 to undergo emergency neurosurgery in the United States of America in order to be able to walk again.

The report from Clearwater, Florida US, states that the patient is a candidate for autologous adipose stem cell therapy for his spinal cord injury, something that has resulted in his paralysis.

“His therapy will include removal of his adipose tissue and administered intrathecally to promote the healing of his nerve system within the thecal sac to the brain,” parts of the report read.

Daniel Alubadek is quoted in a mynewsgh report as saying: “There has not been any massive improvement since the unfortunate incident. There is an arrangement with [the] Government for some little support. At the initial stages, the former headmaster tried for me to get some treatment. Sometime ago, the Minister for Tourism and Culture during one of her visits to the school was reminded of my situation. She promised to liaise with authorities so I get the best […] treatment.”

Twenty people, mostly students on an excursion, lost their lives while over 21 others sustained injuries after trees crashed on them following a heavy rainstorm on Sunday, March 19, 2017.

Most of the victims were students of the Wenchi Senior High School (SHS) in the Brong-Ahafo Region while others were tourists. The tourist site was closed down following the incident while a committee was set up by the Government of Ghana to probe the cause of the tragedy.

Presenting a report to Parliament, the then Minister of Tourism, Culture and Creative Arts, Catherine Afeku, stated:

“The report concluded that although this was an act of God, a number of remote and immediate causes were identified as being instrumental to the accident”.

Read below the medical report. 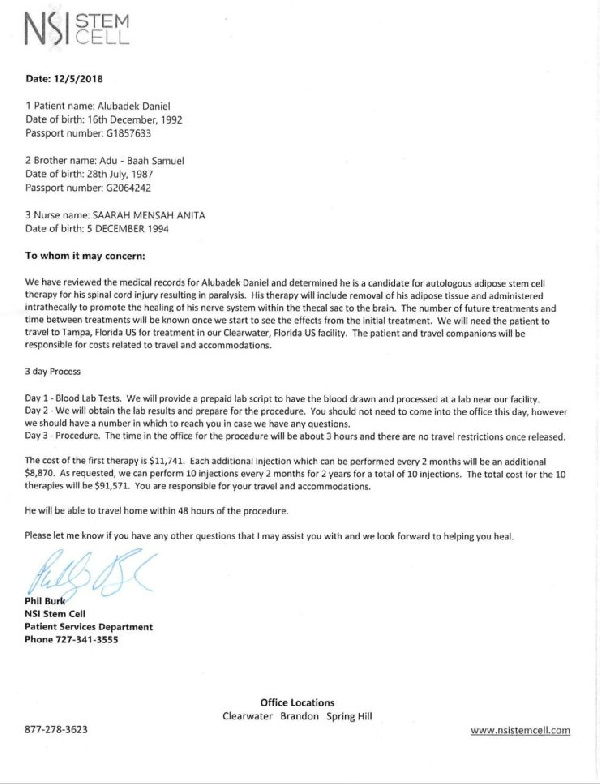