After a decade with Multimedia Group Limited, the host of Adom TV’s Badwam has resigned.

Nana Yaa Brefo, took to her Instagram page to announce her resignation from the media group.

“I bow out of Multimedia to follow other dreams,” she posted.

It is unclear what might have necessitated Nana Yaa’s resignation but many are speculating that she was forced to resign following an interview with Nana Ama McBrown about the demise of the late Bishop Bernard Nyarko, an actor.

Many social media users described the interview as unprofessional; that her line of questioning and behaviour was puerile. In the aforementioned interview, Nana Yaa Brefo asked McBrown questions bothering on whether she had the late actor’s phone number and whether she will attend his funeral.

Nana Yaa Brefo in her post thanked Multimedia Group Limited, her colleagues and fans for the for years of experience.

“I want to say a very big thank you to MultiMedia and my colleagues. Also want to thank my fans for the support, really appreciate also thank those who did not like me, you made me grow during my 10 years stay at Multimedia, (Adom TV),” her post read.

Radio and TV interviews in Ghana are simply fourth rate; they offer very little education, and little to no teaching points; an all-pervasive mediocrity.

It remains to be seen if social media will be the watchdog that watches the watchman or the pillories on Nana Brefo are just a flash in the pan.

Interestingly no one has so far brought up any great interviews the presenter did in 10-years – not even Multimedia, which may be unfair to her.

Over the past few weeks, many so-called celebrity presenters across the mainstream TV and radio stations have either resigned or been sacked, apparently due to the further decline in media revenues caused by the Coronavirus pandemic.

She has since deleted the post after coming under attack. 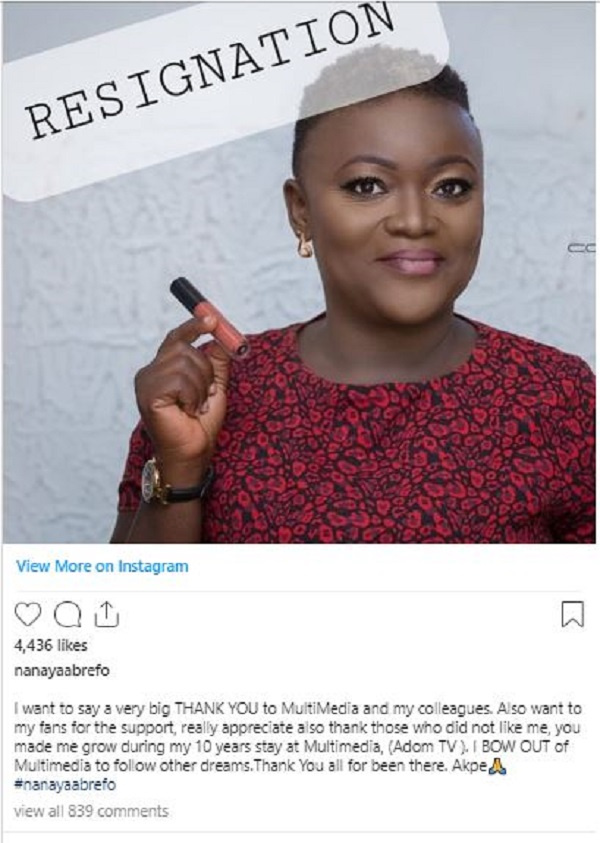